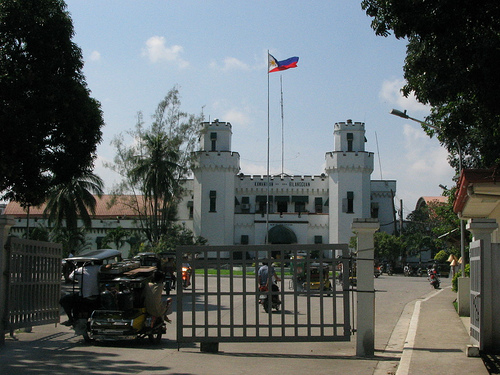 The New Bilibid Prison in Muntinlupa City, Philippines, is the main insular penitentiary designed to house the prison population of the Philippines. It is maintained by the Bureau of Corrections (BuCor) under the Philippine Department of Justice. As of October 2004, it has an inmate population of 16,747. The penitentiary had an initial land area of 551 hectares. One hundred four hectares of the facility were transferred to a housing project of the Department of Justice. The Bureau of Corrections has its headquarters in the NBP Reservation.

History
The Old Bilibid Prison, then known as Carcel y Presidio Correccional ( Spanish, "Correctional Jail and Military Prison") occupied a rectangular piece of land which was part of the Mayhalique Estate in the heart of Manila. The old prison was established on June 25, 1865 under a Spanish royal decree. It is divided into two sections the Carcel Section which could accommodate 600 inmates and the Presidio, which could accommodate 527 prisoners. Due to increasing crime, the Philippine Government enacted Commonwealth Act No. 67 and a new prison was built in Muntinlupa on 551 hectares of land at an area considered at that time to be " remote". Construction began in 1936 with a budget of one million pesos. In 1940, the prisoners, equipment and facilities were transferred to the new prison. The remnants of the old facility was used by the City of Manila as its detention center then known as Manila City Jail. In 1941 the new facility was officially named "The New Bilibid Prison".

Recreation and facilities
The prisoners pass the time in the basketball court in the penitentiary's gymnasium. They are also engaged in the production of handicrafts. Various religious organizations are active in the prison and daily masses are held in the prison's chapel. The New Bilibid Prison also houses a talipapa (market) where the prisoners can buy commodities. Educational facilities inside the compound provide elementary education, high school education, vocational training and adult literacy programs. It also provides a Bachelor's Degree in Commerce. Medical services are given by religious groups and charitable organizations such as the Seventh-day Adventist Church, Amazing Grace Christian ministries, Philippine Prison Jesuit Service and Caritas Manila.

Katarungan Village
On September 5, 1991 President Corazon C. Aquino issued Presidential Proclamation No. 792, which was amended by Presidential Proclamation No. 120 on December 15, 1992 to the effect that 104.22 hectares of land be developed into housing for employees of the Department of Justice and other government agencies. This housing project is known as the Katarungan Village.

OpenBuildings - OpenBuildings is a searchable archive of buildings from across the globe including historic, contemporary or conceptual architecture.