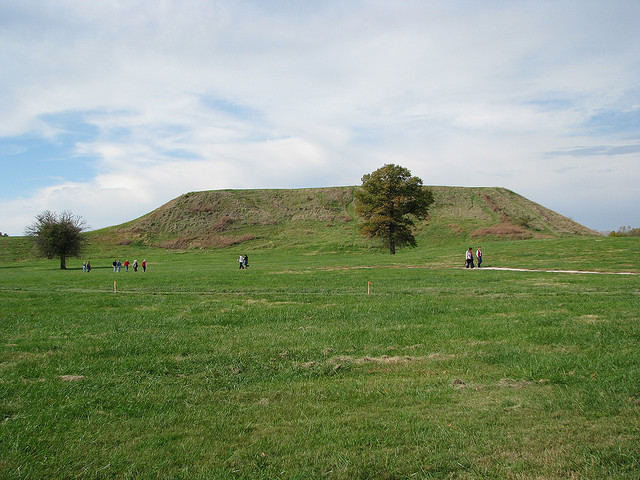 Cahokia Mound State Park, located in southern Illinois just across the river from St. Louis, Missouri, is the site of a great ancient city. The center of Mississipian Indian culture from 900 to 1300 AD, Cahokia was the largest pre-Columbian community in North America. The Cahokians built several ritual earthwork mounds that can still be seen today.

The Cahokians built three types of earthen mounds, which can all be seen today in Cahokia Mound State Park. The most important were pyramid-shaped platform mounds, which had flat tops that served as bases for ceremonial buildings or homes of the elite. Conical and ridge-top mounds were used for burials of important people and victims of sacrificial rituals. At its peak, Cahokia included 120 mounds.

The largest mound at Cahokia is a tiered pyramid known as Monks Mound, the largest prehistoric mound in the Americas. It gets its name from a community of Trappist monks who lived there from 1809 to 1813 and grew their vegetables on the terraces. Rising over 108 feet from its 16-acre base, it contains 22 million cubic feet (623,000 cubic meters) of earth. The earth was transported from nearby “borrow pits” in baskets carried on the backs of workers.

At the top of Monks Mound was a large wooden building — 105-feet long, 48 feet wide and about 50 feet high — that is believed to have been the temple and ceremonial home of the city’s ruler, the "Great Sun." Only the ruler and his priests could enter the temple on the summit. A sacred fire was kept burning at the top, which could be seen by the Mississipians from afar. There is evidence of human sacrifice here.

Today, visitors can climb to the top of Monks Mound via a modern stairway. The summit provides an excellent view of the site and of of the city of St. Louis across the river.

South of Monks Mound, and astronically aligned with it, is Mound 72, also known as the Mound of the Ruler-Priest. In this ridge-top burial mound, archeologists found the remains of an important ruler, a male in his 40s, lain on a bed of more than 20,000 marine shell beads. Nearby were caches of arrow tips from as far away as Arkansas, Oklahoma, Tennessee and Wisconsin, apparently sent in tribute to the deceased.

The buried man is thought to be the highest ruler of Cahokia, who was revered as the manifestation of the "Great Sun." The main skeleton was accompanied by the bones of six human sacrificial victims, and nearby were the bodies of 53 young women and four men who had had their heads and hands cut off. The human sacrifices may have been part of a mythical ritual, possibly a retelling of the story of creation.

Between the mounds were a series of plazas, the biggest of which — the Grand Plaza — covered almost 50 acres. These plazas were used for feasts, processions, public gatherings, and chunkey. Chunkey was a two-player game that consisted of rolling a smooth wheel-shaped stone and then throwing spears to try to come closest to the spot where the stone would come to rest.

Also discovered at the site was a palisade intended to protect the inner city and a circle of wooden poles known as Woodhenge, used as a solar calendar. Near the mounds is the Cahokian Interpretive Center, which has many reconstructions of Cahokian life and displays artifacts excavated at the site.

Sacred Destinations - An ecumenical guide to sacred sites and religious buildings around the world.