The Terrible Curse of Griffith Park 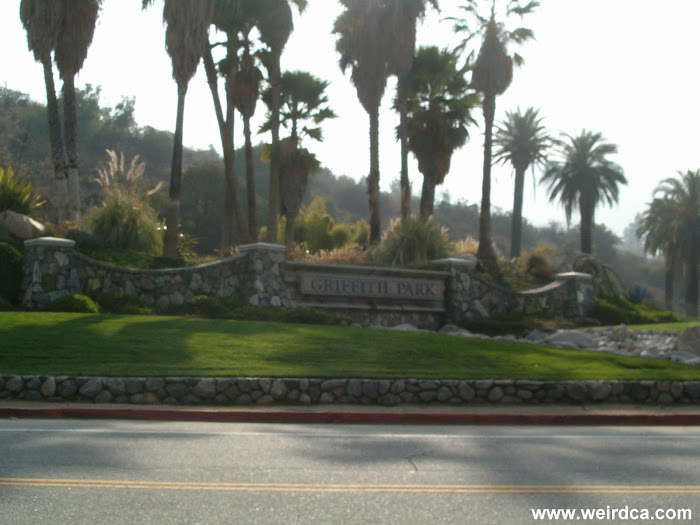 At 4,210 acres, Griffith Park in Los Angeles is not only the second largest park in California but also one of the nation's largest parks. Located within the park is the Griffith Observatory, the Greek Amphitheatre, the Los Angeles Zoo, the Museum of the American West, the Travel Town train museum, two golf courses, a merry-go-around, countless hiking and horse trails, the Haunted Hollywood Sign, a few ghosts, and an old 1863 curse.

What? A curse, you say? Originally all this land belonged to the Felizes and was called Rancho Los Feliz. Eventually it became the property of Don Antonio Feliz who resided on the land with his sister named Soledad and his 17 year old blind niece, Dona Petranilla. In 1863, Don Antonio Feliz passed away and instead of leaving his land to his family, he left all of it to Don Antonio Coronel (there is still a very small street in LA probably named after him, consisting of less than a dozen houses). The story relates, how Don Antonio Feliz was wasting away with smallpox and on his deathbed, Don Antonio Coronel visited him with a lawyer, Don Innocante. Supposedly these two gentlemen drew up the will and the story claims that a stick was attached to the back of Don Antonio Feliz to help the poor dying man nod his head in agreement to the new will. The new will was witnessed by several ranch workers with the surname Paco who resided a short distance from the main house. Regardless of if that story is true or not, the land went to Don Antonio Coronel and not Dona Petranilla. A few items supposedly went to Soledad and some other relatives. His godson received a few horses, but the land the lion's share of the wealth went to Don Coronel and Petranilla received nothing.

Dona Petranilla was, to say the least, obviously not pleased. Don Feliz's niece laid down a curse on the land, Don Coronel, Don Innocante, and even the judge that upheld the will's legality. Afterwards, in order to put the final touch on the curse, she apparently dropped dead. If you believe the stories, the lawyer, Don Innocante, was soon shot and killed and the judge apparently also met an untimely end. Don Coronel's family supposedly slowly died of misfortune and disease. When Coronel passed away, he left the land to his young wife, who promptly remarried. Her new husband and her fought over the inheritance and in the ensuing divorce, the lawyers consumed most of the inheritance. In late 1868, a C. V. Howard owned part of the land, and sold of the land's water rights for a nice tidy profit. He was supposedly shot at a saloon while celebrating his good fortune. The land eventually passed to Leon "Lucky" Baldwin, whose lucky streak immediately ended when he started a ranch and dairy on the property. The cattle on the land died, fires destroyed grain, grasshoppers devoured crops, and nothing basically went right. After he went bankrupted and was forced to sell the land to pay for the mortgage, Baldwin was supposedly gunned down by an outlaw (some stories say Mexican bandits). The land ended up with a Thomas Bell, a financier from San Francisco. He didn't hold the land long though before selling it to Colonel Griffith J Griffith. Bell apparently lived into his eighties and then fell from his mansion's banister - or was pushed by mistress depending on the story you believe.

Now where did this story come from? Well from the fanciful mind of one Horace Bell, a frontier author who wrote and founded a newspaper devoted to social commentary called the Porcupine. Often Bell's stories attacked the social elite of the area, and his attacks on Griffith J. Griffith were no exception. The truth of the matter is probably slightly different then the one portrayed by Mr. Horace Bell. Petranilla, was apparently not blind. She did not die after placing a curse on the estate, and lived for another thirty four years after the events depicted in the story, apparently dying of a heart problem. Although there is no proof that she did or did not place a curse on the estate. She was probably in her early twenties at the time that Don Feliz passed away. The godson who received some horses was her son, Juan Sanchez, who she had with Esteban Sanchez.

The land was sold to a Colonel Griffith Jenkins Griffith in 1882. Yes, his first and last names are the same, and his military rank is believed to be made up (in fact the only military title he probably held was Major of Riflery Practice with the California National Guard). Griffith was well known for his aristocratic pretensions and his uncanny knack for finding silver and gold. He allowed a man named Frank Burkett to start an ostrich farm on the property to lure residents to the area and Griffith's other surrounding properties. By 1884, the curse popped up again as a huge storm racked the land. Lightning came down upon some of the oak trees on the property and the ranch hands claimed to see Don Antonio Feliz riding the rain. Don Antonio continued to haunt the land after the storm, often appearing near an area called Bee Rock. Griffith refused to visit the land except at midday and the stories claim that the ostriches stampeded at night.

With ghosts appearing and ostriches stampeding, Griffith eventually foreclosed on the ostrich farm which was failing, causing Burkett to vow vengeance. Burkett ended up attempting to gun down Griffith with a shot gun outside Old Calvary Cemetery, now Cathedral High School on North Broadway. Burkett apparently used bird shot instead of buck shot, which was the only reason Griffith survived. Apparently Burkett thought he had succeeded in killing Griffith so he committed suicide with a revolver to the head.

To get away from the cursed land and the ghost, Griffith donated 3,015 acres to the city of Los Angeles in December 1896. But the curse wouldn't let him get away that easily. Afterward, Griffith, a devout Protestant, came to the conclusion that the Pope and his Catholic wife, Christina Mesmer, were conspiring to poison him and steal all of his money. Christina was a well to do, very rich society woman herself. It is reported that at dinner, Griffith would often switch his plate with hers when she wasn't looking, thus ensuring that the "poisoned" food was in front of her instead of him. He eventually took a preemptive strike and shot his wife while they stayed at the Arcadia Hotel in Santa Monica. Although she survived, having to throw herself from the window, land on an awning and crawl to safety through yet another window, she was disfigured and blind in one eye afterwards. Griffith served only two years in San Quentin for attempted murder, but his reputation was never the same. After he was released from prison, the city ignored his attempts to continue building up Griffith Park, wanting nothing officially to do with him. Griffith did, however, set up a trust fund to have his improvements, the Observatory and Greek Theater, built and cared for after he passed away. He passed away in 1919 and is laid to rest at Hollywood Forever Cemetery.

If you believe writer and newspaperman Horace Bell, Don Antonio Feliz again appeared in 1898. Apparently the city's influential people had gathered in Griffith Park to celebrate a fiesta. The specter appeared at the head of an oaken banquet table and also chased the party goers on horseback as they fled the party.

In this century, Los Angeles has only suffered one unfortunate event on the land. That was when a 1933 fire left 29 people dead and 150 more injured. This fire is the deadliest in Los Angeles history.

However, even though the curse doesn't appear to be inflicting pain upon anyone any more, several ghosts have been sighted throughout the park. In addition to Don Antonio Feliz, who besides his famous 1898 party crashing scene, has been seen riding the parks trails and laughing crazily on top of large rocks overlooking the park, there is also his niece, Dona Petranilla. The original curse layer has been seen wandering the land dressed in white. She additionally appears occasionally in an old adobe used for the park headquarters and has been seen riding a white horse around midnight. An additional mounted ghost has been spotted riding in the park. This spirit is believed to be the ghost of Griffith J. Griffith as the style of the rider does not match that of a Spanish Don. A ghost girl has been seen throughout the park and she seems to be looking for help. Some people believe she was abandoned in the park and eventually died from exposure and that now she is wandering the park looking for the parents that left her behind. A ghost lurks near the Merry Go Round, having been seen descending steps nearby and disappearing as he reaches the last step. Both Travel Town and the Observatory brought in teams to investigate paranormal activity due to the number of reported sightings at both. The teams found nothing, however. And of course there's the ghost of Peg Entwistle, a suicide victim, can be found lurking around the Hollywood Sign.

One location that Dona Petranilla is said to haunt is the Crystal Springs Ranger Headquarters also called the Paco Feliz Adobe. She apparently appears as a ghostly senorita in a white dress watching from the adobe's windows on dark and rainy nights. Of course, she never lived in this adobe, but it is the only remaining structure from that time period and probably served as the house for servants or ranch hands. In 1921, the park managed to demolish the original Feliz manor.

As if the ghosts, curses, and other general weirdness wasn't enough, urban legend also claims that there's some sort of creature lurking in the park and stalking its visitors. Three witnesses described it as "humanoid of some sort. Its legs were very long as well as its feet and it was talking huge strides as it made its way down the street. Its back was bent back and its neck was very long and was bent forward. They said no human could be bent like this thing was. Its eyes were black, but it did have the whites as well. Its skin was transparent green, and it was wearing nothing but white pants and black shoes." From About.com.

So there you have it. The history of Griffith Park is full of ghosts, death, fraud, a strange beast, and ostriches. Add into that a blind curse wielding niece, a paranoid man with the same first and last name who believed the Pope was colluding with his wife to kill him, two ghosts protecting their deathbed of a picnic table, along with the entrance to Toon Town, not to mention the usual Satanic Cults, animal sacrifice, prostitutes, etc, and Griffith Park easily earns its entry here at Weird California.